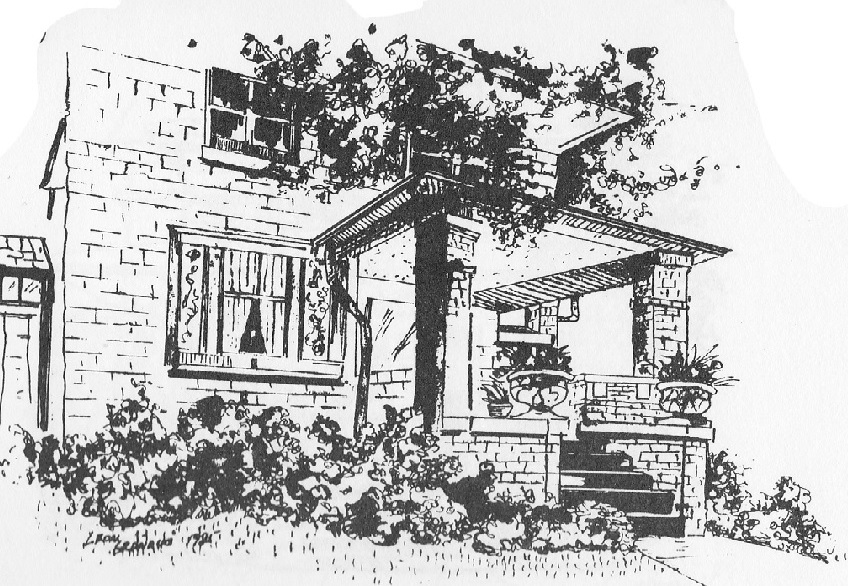 “This residence was originally built for P. Mahaffey. The residence represents, in the American culture, a new declaration of architecture … independent of the European tradition in forms of space and as a function of life … dark brick massing walls with a raked brick and matching mortar, overhanging eaves and casement windows … oak floors, woodwork and staircase …the leaded glass windows are truly among the most magnificent in this area.” 2015 update: The house was built for Sam Mahaffey and his wife Pearl, previously of 4106 N. Springfield. Sam was the president of a wholesale potato company. 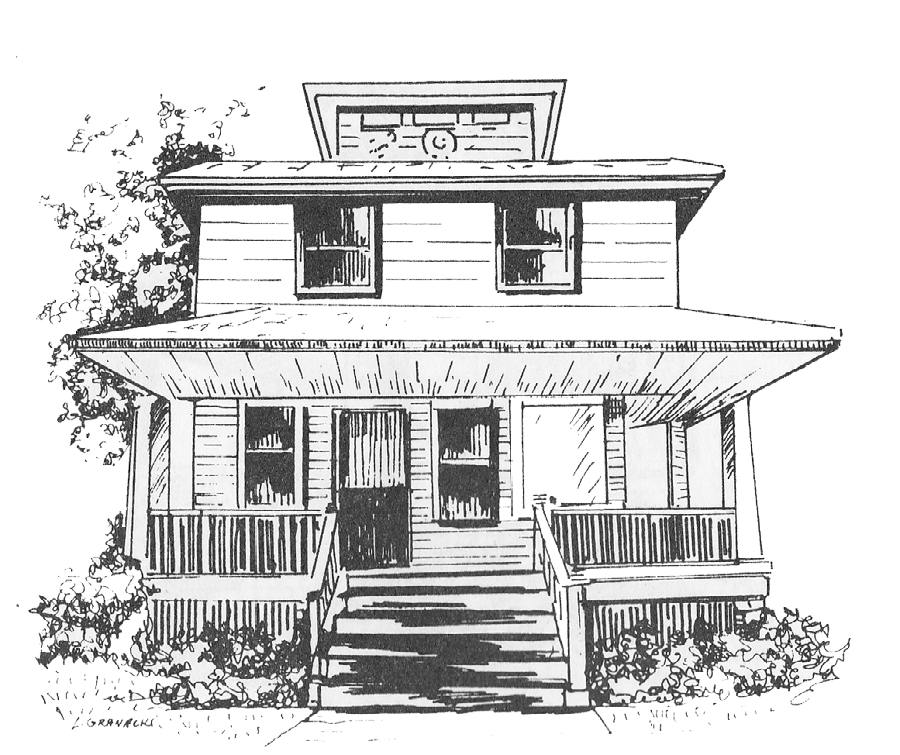 “This home was built by Andrew Sundene, a developer, who later developed large parts of Portage Park. The first occupants moved in July, 1911. They lived here for 64 years and modified the home only once.” 2015 update: Owner Robert P. Kilbert was an artist born in Germany, who lived here with his wife Elizabeth and son Robert from the time the house was built through the 1940s. 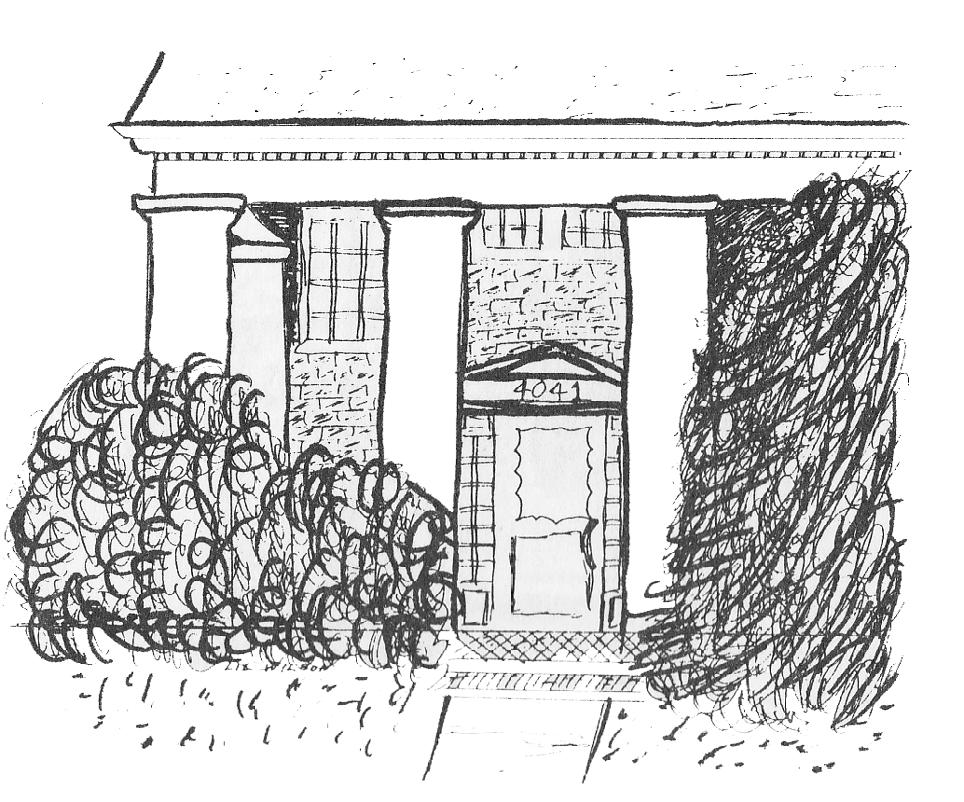 “This home was built in 1905 by the Windmiller Family, who owned a department store at Central Park & Irving Park for many decades…”

2015 update: A highlight of the 2012 IPHS House Walk, the true history was revealed to be that the house had been built and occupied by the famous, well-regarded Chicago architect, Elmer C. Jensen. A later owner of this home was Paul Windmueller(1920 through 1937), president of the Northwestern Pharmacy, located in Wicker Park. 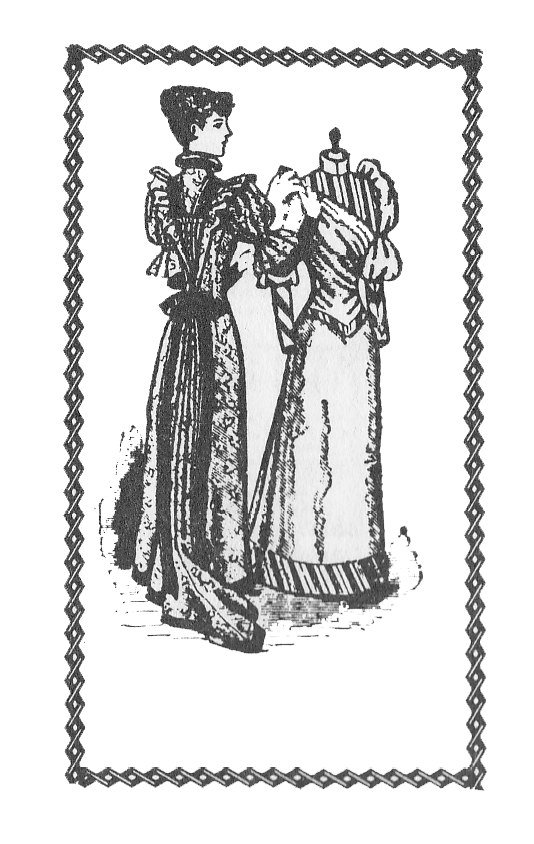 “For many years, Bea Wagar of Pert Cleaners has been collecting antiquest that were related to her work. She has amassed such a collection of antique sewing machines, laundry equipment, scrub boards and flat irons – the front of the cleaners has been turned into a virtual museum.” 2015 update: Thirty years later, Pert Cleaners is still the place most of us trust with our dry cleaning. Thanks for being such a great neighbor, Pert! 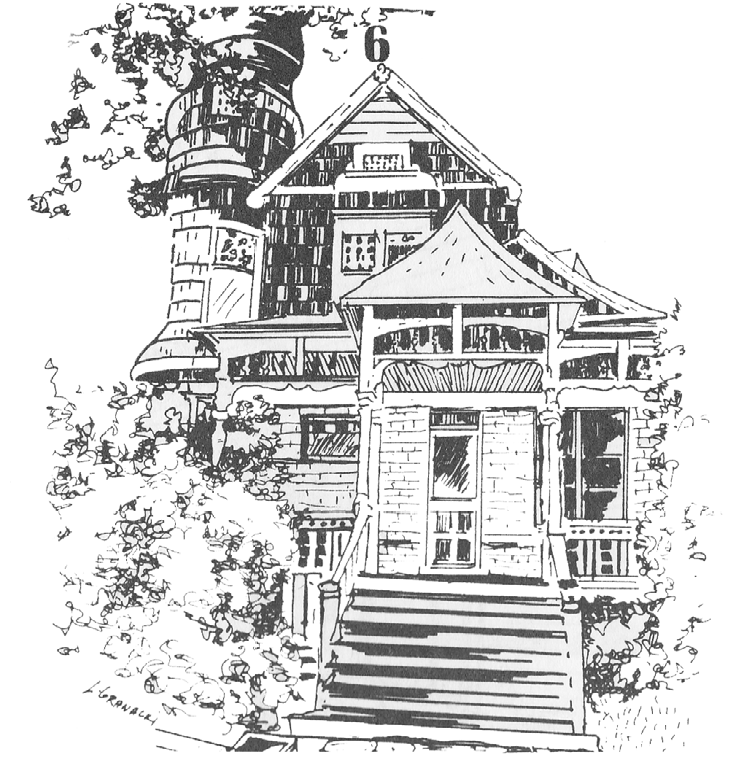 “This home was built by in 1889 for Charles N. Loucks at a cost of $15,000. The architect … was Clarence N. Tabor … The original owner lived in this house for eight years … in 1971 it was almost sold to a builder who was going to demolish it and replace it with an apartment building.”

2015 update: This house was featured a number of times on the IPHS Housewalk. The owners in 1985 were also the founders of the IPHS. The work they accomplished earned a Certified Historic Restoration and a listing on the National Register of Historic Places. The current owners, who’ve called this place home since 2000, have worked diligently and under their stewardship the house has become a Chicago Landmark. 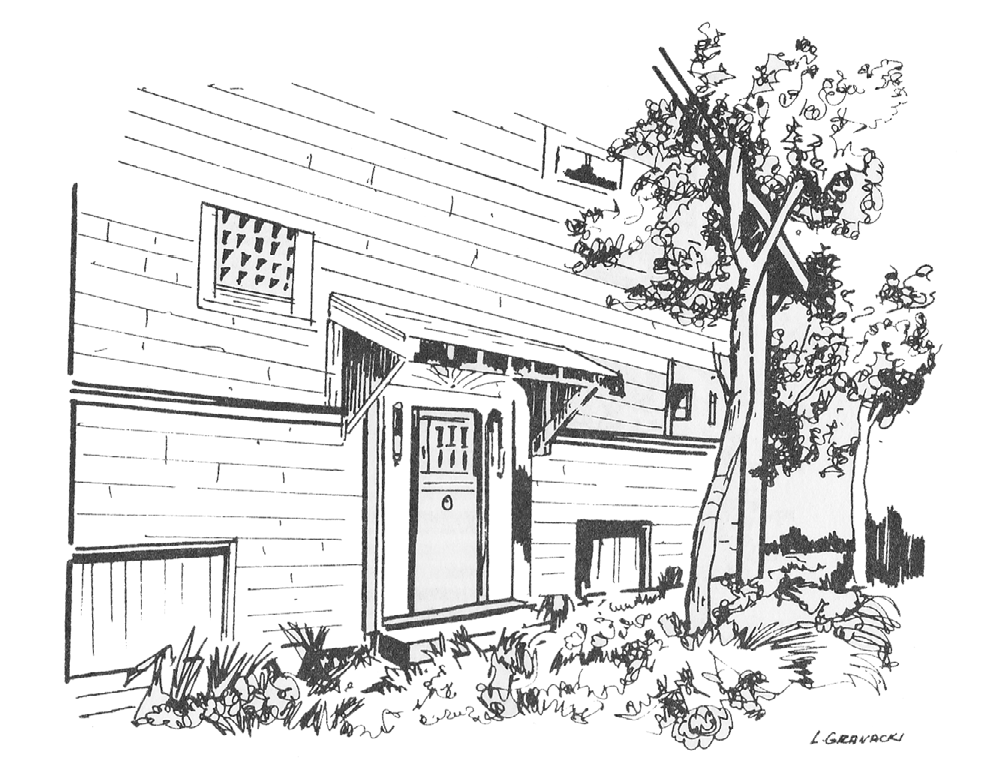 “The owner … was his own contractor… This style is a reaction, and in direct contrast, to the opulent detailing found in Victorian homes…When the current owner purchased this home in 1983 it had fallen into disrepair. The current owner … is in the process of completely renovating this house.”

2015 update: This house, built on the once-garden property of its neighbor to the north, is no longer extant. It was torn down in the early 1990s and replaced by one of the first of the large, non-architecturally styled structures that appeared in Old Irving Park during this era of homebuilding. 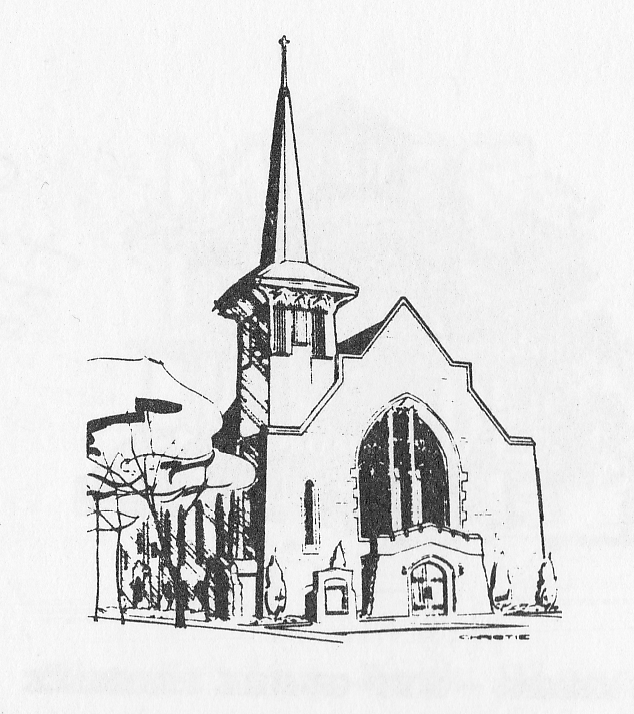 “The Dutch Reformed Church and Society of Irving Park …completed summer of 1872 at a cost of $9,000 on 3 lots donated by village founder Charles T. Race. The architect, Henry Rehwoldt, an Irving Park residen, also designed most of the homes built around that time… In 1908, the church building was enlarged and covered with Bedford stone.” 2015 update: Though no longer the Presbyterian Church, the building still stands and functions as a house of worship. 30 years ago, the Housewalk held a historical display here, and made refreshments available within.

“The exact age of this house is still under investigation…it was rumored to have been in the Underground Railroad… it is certain that it was standing in 1871 …we heard that they watched the Chicago fire from the cupola … also the Indians …Elston Ave. was their trail and could easily be seen from the cupola. At one time the Indians were said to have quite an encampment at the Des Plaines River.” 2015 update: Despite only exterior viewing on this particular House Walk, the 1994 House Walk featured the interior and beautiful restoration done by the owner. See 1994 House Walk info below. It was added to the National Register of Historic Places in April, 1985 and became an IPHS Century House in 2008. It remains one of Old Irving Park’s most beloved and well-known landmarks. 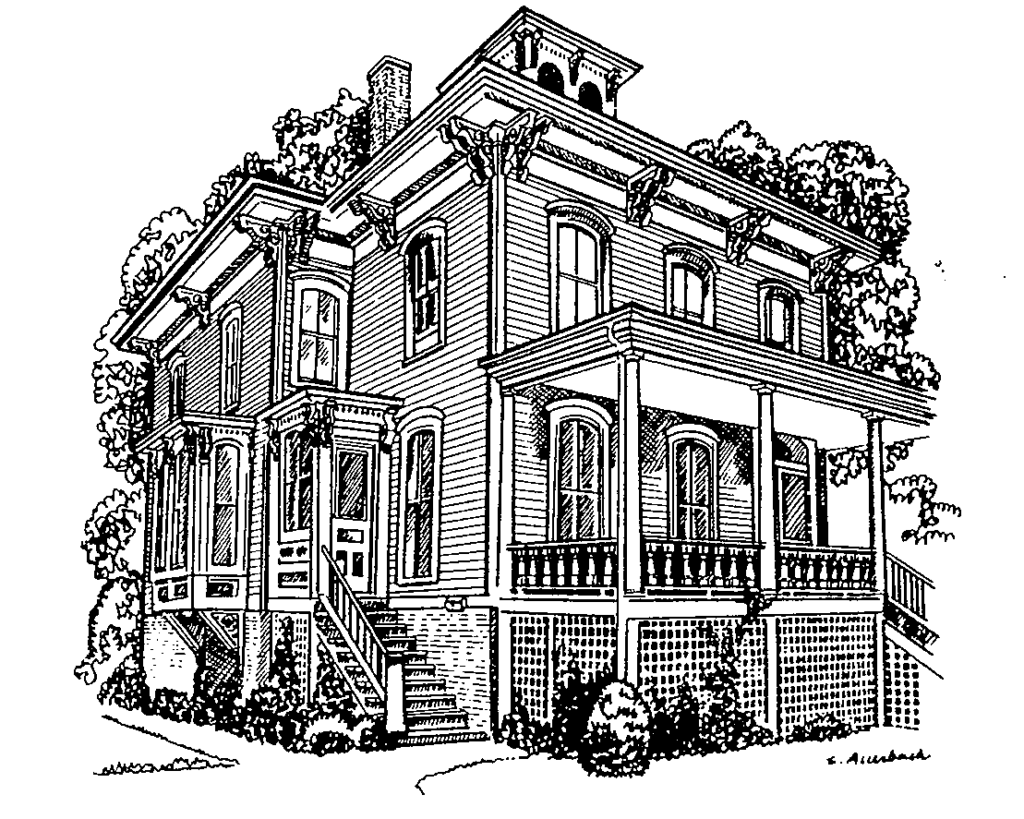 “The Ropp-Grabill home is one of the most historically and architecturally significant homes in Old Irving Park.  It is believed to have been built in the early 1860’s, making it one of only two homes in the area to pre-date the founding of Irving Park in 1869. It has remained virtually intact with the exception of a remodeling in the 1880’s at which time the front porch and bay window were added.  The early ownership of the home is uncertain, so it is named after the two owners who occupied and cared for it for a period of over 80 years, from the 1890’s until the late 1970’s.  It was acquired by neighbors John & Marion Hass, who sold it to the current owner, Peggy Brockhaus in 1990. The home is considered one of the finest examples of Italianate architecture in the state of Illinois, and in 1985 was added to the National Register of Historic Places.  Typical features of this style include its box-like shape, tall arched windows, bracketed roof and cupola. The interior retains many original features including mouldings, oak and maple floors and pocket doors.  The fireplace and dining room wainscoting remain from the 1880’s remodeling.  The current owner has furnished the home with a variety of lovely antiques and decorated in a style in keeping with the age of the home.  Newer features included a remodeled kitchen and new first floor bath and laundry room.”